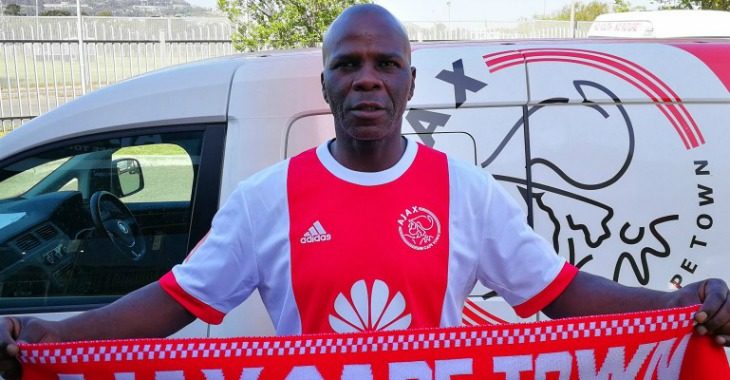 Ajax Cape Town are delighted to welcome David Nyathi back to the club, with the former Bafana Bafana international to officially kick-off his second spell at Ikamva on Monday, 13 November.

The 48-year-old will take up the Young Ajax assistant coaching position, working hand-in-hand with head coach Duncan Crowie in both the ABC Motsepe League, MultiChoice Diski Challenge and other alternative tournaments.

The #UrbanWarriors are delighted to welcome former Bafana Bafana internaitonal David Nyathi back to Ikamva. ?❤️

He has been appointed as assistant coach to Young Ajax boss Duncan Crowie.

“I am happy to be here, it has been quite a while,” said Nyathi on his return to the Urban Warriors Ikamva base.

“I started with the U12’s [in 2008] which was a bit of a challenge, but an interesting bunch to work with, we had a very nice team and I enjoyed the group. They were obviously very cooperative and talent wise they were very advanced so it was easy to work with them.

“I was then promoted up to the U15’s. Initially they were identified as a group that needs a lot of focus and hard work. I duly got to work and we managed to compete and win the Nike Tournament in Johannesburg with victory of SuperSport United.

“During my first spell here we also won the Bayhill U19 Metropolitan Tournament in 2013 under may watch so yes, it was successful and I hope to achieve more success.

Nyathi has been a busy man in his three years away from the club and currently serves as the CEO of the South African Masters & Legends Football Association (SAMLFA).

“A lot of things has happened [since 2014], I am actually the CEO of the South African Masters and Legends – nationally. I am also the chairperson,” Nyathi added. “So yes, I also have something going outside the field of play that keeps me busy.

“It is also very exciting outside of football, but I am very happy to be part of the beautiful academy, share my knowledge with the kids and work in this wonderful environment.

Nyathi is delighted to re-unite with Head of Youth at Ajax Cape Town, Hans Vonk, with the two now set to work together, having both enjoyed great success playing together for the national team.

“I have been with Hans in the national team so we know each other very well from a teammate perspective. We were together at the 1998 FIFA World Cup in France so I have good knowledge of him as a person, he is an exceptional goalkeeper and leader as well.

“I now have to understand the concept he introduces, the philosophy he wants and the kind of approach he will instill in us to direct the players to the kind of level that we expect from this great academy.

“When you reach levels that are sometimes very difficult to reach it becomes your standard of life, and as a result you want to be successful in everything you do. I have the same mentality and I want to achieve things,” Nyathi continued.

“The balance between development and success with the youth has to be reached. You have to look in terms of longevity, do you want to achieve instant success or longevity in terms of raising quality players that will enjoy a sustainable career for a long time in their future?

“We have to balance that kind of achievement. Winning trophies is good, but developing real quality players that will overcome and combat all the stages of a professional football is very key.

“We need to find a balance, but yes I want to win, all the coaches want to win, so we will join hands and make sure we create that kind of environment,” he concluded.