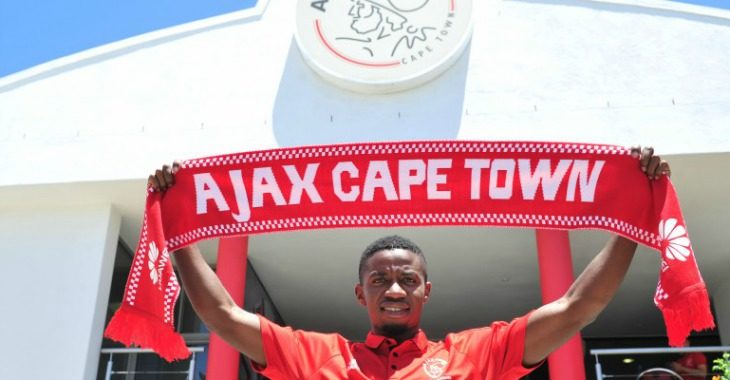 Ajax Cape Town are delighted to welcome Gerald ‘The General’ Takwara to Ikamva.

The Zimbabwe international has committed his services to the club for the next three years.

Takwara, 23, caught the Urban Warriors attention at the 2017 COSAFA Cup Tournament in Rustenburg, where his exploits in the middle of the park helped The Warriors of Zimbabwe to the crown.

“It is a great feeling, I am really happy to have finally joined the Urban Warriors,” Takwara said.

“I’d describe myself as a tough-tackling midfielder, I’m massive [laughs], I can pass the ball around, but I’d say my best attribute is breaking down opposition attacks.

“Winning the league is one of the best feelings, it has been a steady rise for me and I hope to continue my rise at Ajax Cape Town. I’ve followed the club closely and I’m confident I can make a positive impact here.”

Head of Football at Ajax Cape Town, Mich D’Avray, is excited by the Urban Warriors latest acquisition with Takwara set to shine in the ‘number six’ role at the club.

“We first spotted Gerald at the COSAFA Cup Tournament in Rustenburg, we brought him here in pre-season and looked to sign him then, but he was still contracted to his club and they wanted him to stay put as they were pushing for the league title in Zimbabwe,” said D’Avray.

“But, we finally got our man and we look forward to what we will bring to the club.

“He [Takwara] is a nuggety midfielder, quite aggressive, very strong. Hopefully he can adjust and settle in quickly.

“He has a bit of bite in him, he gets stuck in and keeps it simple,” D’Avray concluded.