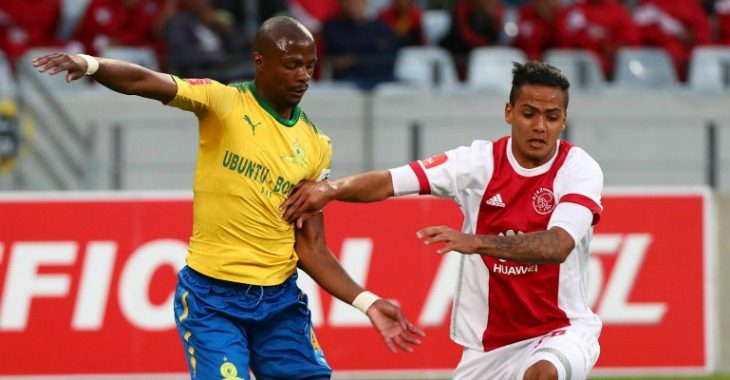 Ajax Cape Town raced into the lead once more, only to suffer defeat for the second time in five days as Mamelodi Sundowns claimed a 2-1 win at Cape Town Stadium on Tuesday evening.

Following a rather cagey start, Fagrie Lakay hit the back of the net with 26 minutes on the clock to give the Urban Warriors the lead in the Mother City.

The forward proved a real handful all night long and got his due reward as he brushed off his marker before firing past Denis Onyango, 1-0.

Sundowns, though, would quickly find their mojo and pulled level following a sustained spell of pressure.

Ricardo Nascimento making no mistake from the spot following a handball in the area, 1-1 after 37 minutes.

Two minutes later and Pitso Mosimane’s men would hit the front. Tau with the inch-perfect cross to tee up Sibusiso Vilakazi who made no mistake from close range.

The Brazilians coming from behind to hold a narrow lead at the interval.

Sundowns used up an early lifeline following the break as Lakay fired over with the goal at his mercy.

At the other end of the pitch Tau weaved his way past Mario Booysen, but failed to hit the target as Ajax Cape Town pushed bodies forward.

Lakay would go close once more on the hour mark, but it was not to be for the Urban Warriors as the visitors successfully navigated through the final exchanges to leave the Mother City with all three points.