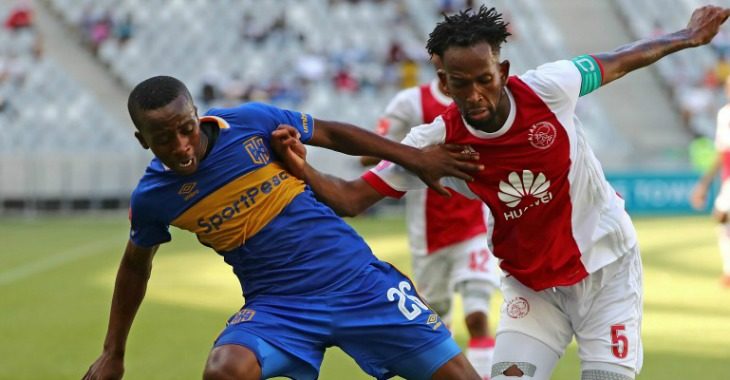 Craig Martin scored the only goal of the game as Cape Town City beat Ajax Cape Town 1-0 in an Absa Premiership showdown at Cape Town Stadium on Saturday afternoon.

The Citizens were in the ascendancy for most of the early exchanges with Martin unlucky to see his attempt canon off the woodwork in the 13th minute of the clash; having chipped the ball over the on-rushing Brandon Petersen.

Ajax Cape Town, though, fought their way back into the match with Ndiviwe Mdabuka unlucky to see his header attempt fly inches over the crossbar five minutes later.

Thabo Nodada then burst straight through on goal with 39 minutes on the clock, but Petersen was on hand to make an excellent save.

The Urban Warriors suffered a major blow soon after as Gerald Takwara received his marching orders following second bookable offence. The Zimbabwe international unlucky to see red in what was his first iKapa Derby.

Despite the man disadvantage, Ajax Cape Town conjured the final chance of the half as Sirgio Kammies sent his attempt narrowly wide of goal on the cusp of half-time. Goalless at the break.

Chances were few and far between for the remainder of the clash with Ajax Cape Town pegged on the back foot.

Ajax Cape Town had their chances on the counter-attack with Fagrie Lakay especially lively for the Urban Warriors.

Namesake, Lyle Lakay had a chance to wrap up proceedings in the 90th minute of the match, but Petersen was up to task; the goal-minder with an great save to keep out the midfielder’s free-kick.

Ajax Cape Town pressed forward in search of the equalizer, but it was not to be as City held on for all three points.