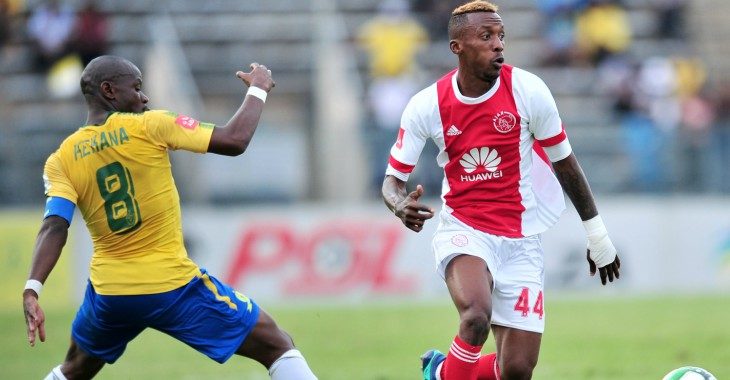 Ajax Cape Town suffered a 3-1 defeat to Mamelodi Sundowns at the Lucas Moripe Stadium on Saturday afternoon as the Brazilians clinched an eighth Absa Premiership title.
Mosa Lebusa fired the Urban Warriors in front with two minutes on the clock. The fullback alert in the box as Rodrick Kabwe’s corner-kick fell into his path after beating a host of bodies at the near post. The Ajax Cape Town skipper with a neat finish for his second goal in as many games.
Sundowns, though, hit straight back as Khama Billiat finished off a flowing move in the 12th minute. Percy Tau with a precise cross after weaving his way past a couple of defenders as Billiat prodded home for a goal against his former club.
Yannick Zakri went within inches of regaining the lead for the visitors as he hammered the woodwork  with a stinging volley in the 22nd minute.
Ricardo Nascimento then provided a sucker punch seven minutes later as he converted from the spot following a foul on Billiat from Jody February.
Sibusiso Vilakazi doubled the hosts lead with a cool finish in the 36th minute as Sundowns took a two-goal lead into the interval.
The pace of the game slowed down in the second half as the Brazilians welcomed the Urban Warriors attack with Pitso Mosimane’s men choosing to hit on the break.
A devastating counter-attack almost paid dividends on the hour mark, but February pulled off a world class save to deny Billiat from point-blank range.
Tashreeq Morris and Grant Margeman squandered half chances at the other end of the pitch as the Urban Warriors grew increasingly frustrated.
Sundowns deserved winners in the end as they clinched yet another league crown with one round of fixtures in  the 2017-18 season remaining.
Despite the defeat, Ajax Cape Town know that victory over Kaizer Chiefs on the final day of the season will secure safety with fellow relegation contenders Baroka FC and SuperSport United to do battle in Atteridgeville on the same day.
Mamelodi Sundowns (3) 3 (Billiat 12’ Nascimento pen 29’ Vilakazi 36’)
Ajax Cape Town (1) 1 (Lebusa 2’)
Mamelodi Sundowns: Onyango; Langerman, Madisha, Nascimento, Morena, Mabunda, Kekana, Vilakazi (Manyisa 76’), Zwane, Billiat (Laffor 88’), Tau.
Ajax Cape Town: February; Kammies, Nhlapo (Julies 39’), Booysen, Lebusa, Nel (Malepe 62’), Margeman, Kabwe, Losper (Morris 62’), Lakay, Zakri.
Share Post: