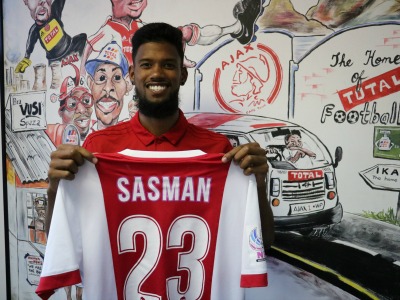 Ajax defender Yagan Sasman has committed his future to the club by signing a new long-term contract at Ikamva today.

The 22-year-old, who joined the Ajax Cape Town Academy as a 10 year old from Retreat, sealed the new deal at the training ground to extend his spell at Ikamva.

Sasman has cemented a place at left-back in Andries Ulderink’s side since the start of the season in the NFD, making 23 appearances in all competitions.

Having signed his first professional contract back in August 2014, the No.23 has shown his commitment by choosing to prolong his stay with the Urban Warriors till 30 June 2021 with an option to stay till 2023.

“As soon as the club came to me, it was a no-brainer – I want to stay here, so as soon as they put an offer on the table it was signed. I want to be part of this team that will take Ajax back to the Psl,” he told Ajax Tv shortly after putting pen to paper.

“It was a pretty easy decision for me and I’m sure for the club as well. We both agreed to continue my relationship with the team, that’s why it’s been done before the season end.

“Being here since 2008 and working with all the staff at Ikamva has been a pleasure. The best thing about work is when you love coming in every day – and that’s what I do here. I am glad I have extended my stay and hopefully we have a lot of good days ahead.”

The 22 year old reiterated the squad’s focus on translating their outstanding form of late into success by getting the team back in the Psl come end of May.