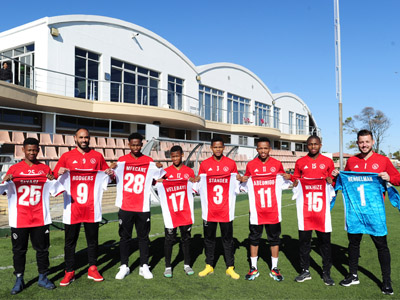 Ajax Cape Town have brought in fresh legs for the new season after the mass exit of last seasons players. The coach and the technical team are looking to bring in a strong brand of new and experienced players into the squad. Coach Andries is looking for a particular type of player that will gel into the Ajax system.

The Urban Warriors brought in Eleazar Rodgers from Free State Stars after the frontman was released by the club following Free State Stars exit from South Africa’s top-flight league. Rodgers has been with the warriors before and he has earned the reputation as a journeyman in South African football. Having netted one goal already for the Warriors on his debut match against his former club in the opening fixture of the GladAfrica Championship.

Coach Andries Ulderink has also gone in search of two new wingers as both Morris and Verhaar left the club during the offseason. The Warriors were very lucky to get their hands on Mosiatlhage Abednego who was on loan the whole season for the NFD champions Stellenbosch FC from Bidvest Wits. Abednego had a fantastic season in the NFD, Ajax managed to pull a rabbit out the hat by getting his signature for the new season.

The Urban Warriors went abroad to bring in FC Twente goalkeeper Nick Hengelman, the 29-year shot-stopper was brought in as a direct replacement to Captain Brandon Petersen who went to Bidvest WIts during the transfer window. Having worked with Andries in the past, Hengelman knows what is expected of him during this season.

Building the spine of the club was always going to be a difficult task, so Ajax went searching for the right fit for our defensive line to cover Nlhapo & Bull. The warriors have been very fortunate to get the signature of ex Highlands Park defender Junior Sibande, fans have gone to social media giving him the nickname “The Ajax Katsande”.

The Urban Warriors have also promoted two 16-year-old players from the youth academy, Asanele Velebayi, and Bhongolwethu Siyasi. Young Velebayi has shown a lot of promise as an Ajax 10 as he was brought straight up from the under 18 squad. Siyasi has been playing with the Ajax ABC squad for the whole of last season where he managed to impress coach Ulderink as a right back.

Coach Andries has indicated there are two more positions that need looking into as we come near the end of the transfer window for the start of the 2019-2020 GladAfrica Championship.