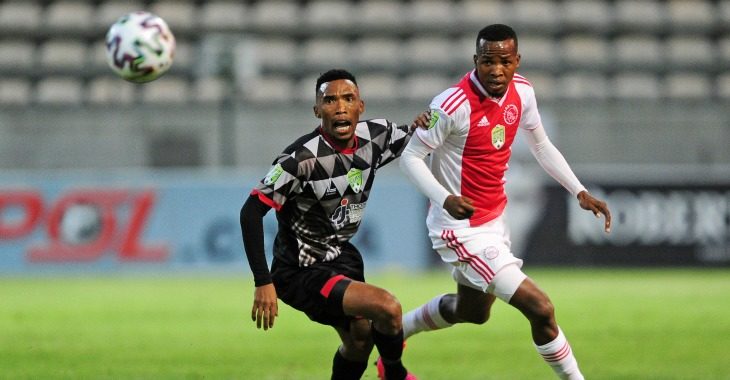 Ajax Cape Town were beaten 4-3 on penalties by TS Sporting following a 2-2 draw in the 2019/20 Nedbank Cup Last 32 match at the Athlone Stadium on Thursday night.

Urban Warriors were eliminated from the tournament, while their GladAfrica Championship rivals Sporting reached the Last 16.

The Urban Warriors saw most of the ball in the opening stages of the match and they had an opportunity to grab an early lead eight minutes into the match.

Katlego Otladisa used his speed to get past the Sporting defence and goalkeeper Oscarine Masuluke, but he decided to cross the ball and it was cleared away.

The hosts were left to rue that chance as the Abantu Bemthetho broke the deadlock 13 minutes before the half-hour mark.

Mbulelo Wagaba embarked on a brilliant solo run before beating Darren Johnson in the Ajax goal-posts to make it 1-0 to Sporting.

The Urban Warriors pushed for the equalizing goal with the half-time break approaching, but the visitors stood firm at the back and the score was 1-0 to Sporting at the interval.

Cohen Stander, who is a left-sided player, was introduced by the home side after the restart as they searched for the equalizing goal.

However, Ajax never lost hope and they managed to grab a late equalizer through inspired substitute Sonwabile Mfecane, who netted to make it 1-1 with a minute left.

The goal ensured that the match ended in a 1-1 draw in regulation time and extra-time followed.

Sporting managed to restore their lead to make it 2-1 when Katlego Mojela, who had replaced Sifiso Myeni, beat Johnson in the 101st minute.

The hosts then fought back and they grabbed another equalizing goal through Siphesihle Mkhize in the 115th minute to ensure that the game ended in a 2-2 draw, and a penalty shootout followed.

Sporting went on to win 4-3 on penalties with former Baroka FC keeper Masuluke being the hero for the away side as he saved three penalties.