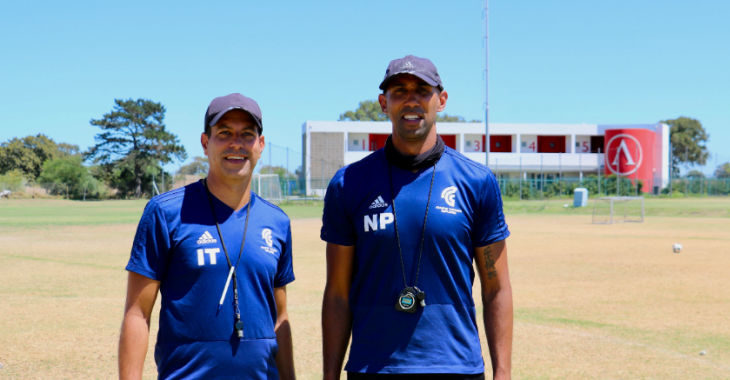 Taylor returned to Ikamva at the start of the 2020-21 season following three years in China and has taken over the reins as head coach from Vladislav Heric, who mutually agreed to end his working relationship with the Urban Warriors last month.

Taylor served as the Head of Talent Development at Chinese Super League club Guangzhou R&F FC, who signed a partnership agreement with Ajax Amsterdam in 2017.

A former Cape Town Spurs player, Taylor rose through the coaching ranks at Ikamva before working as assistant and eventually caretaker coach of the club’s first team. He also enjoyed two spells as head coach of Cape Town All Stars before joining Cape Town City as an assistant coach to Eric Tinkler and later Benni McCarthy.

The 44-year-old will be assisted by Cape football legend Nathan Paulse.

Paulse enjoyed a distinguished playing career that took him to Europe where starred for Swedish top-flight club Hammarby IF. He is best remembered for the time he spent at Ajax Cape Town and famously scored the winning goal in the 2015 MTN8 final win over Kaizer Chiefs.

“We’re taking it one game at a time and trying not to get too far ahead of ourselves. It’s a matter of playing out of our organisational structures basically – and working on elements of conditioning and scoring, which we’re lacking.”.

Paulse added: “Look, I think there’s a lot of hard work that lies ahead of us, but I think we’re on a good track. At this point we can’t look too far ahead, we need to micromanage this season and take it game by game with thorough analysis and weekly targets that we need to set in terms of our environment, culture and harmony in the squad that will lift the quality of our performance.

“It’s obvious that the players haven’t had a good pre-season, and obviously with Covid-19 there are a lot more obstacles but it’s a balancing act of how we can lift the quality towards each game. But we’re enjoying the process and I’m sure the players are embracing it from what we have seen. From there we can only go towards each game and work hard towards getting those three points.”.

Spurs return to action away to Baroka FC in a Nedbank Cup last-32 tie on Monday before hosting 2020-21 GladAfrica Championship leaders Sekhukhune United in a league fixture five days later.