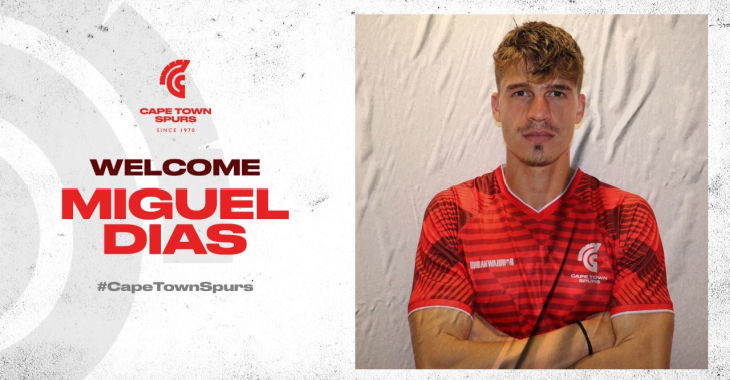 Cape Town Spurs have completed the signing of Miguel Dias, 24, on-loan for the remainder of the 2020-21 season.
We caught up with the former PEC Zwolle and Pretoria University youngster on his arrival at Ikamva:
Welcome to Spurs Miguel, so you said you’re studying at the moment, how’s that going?

“When I was at Tuks, I had the option of studying at Tuks, but obviously I wouldn’t be able to do it part time, so I figured let me go through UNISA where I can do it online, you know. Since then, I’m going into my third year now so I’m almost done – it’s been a drag. But it’s the final push and I just want to get it done now to be honest.”

Is opening your own business something that might happen in the future?

“Definitely, I’ve always liked the idea of being my own boss so definitely one day I will be looking at something like that.”

Any idea what kind of industry or business you’d like to be in or doesn’t that really matter?

“Yes, I mean whatever happens after football we’ll see. At the end of the day, football is what I’m really passionate about. My parents always told me to have a backup plan so that’s what I did and I’m happy about that.”

How’s it been settling in, in Cape Town? Is this your first time here?

“I’ve been here a couple times to play but I’ve never actually come here to stay. So I’ve been here for a week now, it seems very nice. The weather is very nice, but the one thing I’ve been struggling to adjust to is the wind – especially playing wise – with long balls and such, it definitely affects that so that’s something I need to get used to.

“But definitely it’s a beautiful city, obviously the more comfortable I get and the more people I meet I will be able to travel more around the city, but that will come in time.

“The guys are also lekker here which I was very impressed by. When I got here, the people who work in the office were very welcoming which was really nice because not everywhere you go is going to be like that.”

And your new teammates?

“Also, very nice. From what I’ve seen it is quite a young squad which is good because the players that are established in the team – the bigger, more experienced players – aren’t overpowering and don’t have egos that will affect the youngsters and the general feel within the team. So that’s one thing I’ve really enjoyed, I feel like it hasn’t been tough for me to fit in which is cool.”