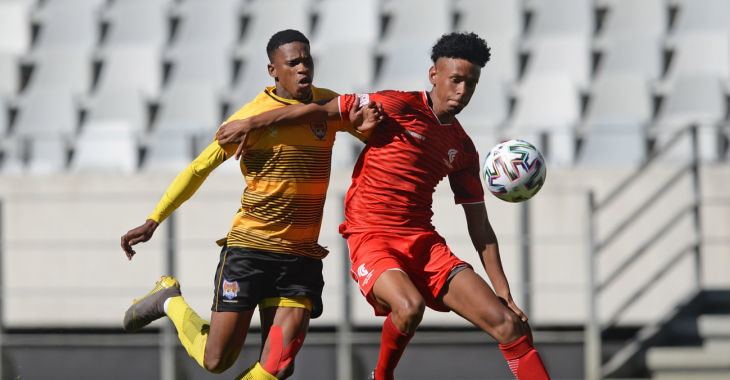 Cape Town Spurs are made to rue a catalogue of missed chances following a 2-1 loss to JDR Stars at Cape Town Stadium on Wednesday.
The Urban Warriors dominated the first half of their 2020-21 GladAfrica Championship tie in the Mother City, but ultimately fell to another defeat on home soil with Abednigo Mosiatlhaga’s late goal proving to be a mere consolation.
Junior Batista, Chumani Butsaka and Mosiatlhaga had shots on goal saved by Stars’ Benin goalkeeper Souke Marcel Dandjinou in the opening stanza.
Having watched their shot-stopper rise to the occasion in the first half, JDR’s attack improved after the break and in the 55th minute Sello Letooane fired home the opener.
Spurs were only denied the equaliser by the woodwork in the 64th minute with Jairo da Silva unlucky to watch his snap shot come back off the crossbar and having survived that scare, JDR doubled their lead through Sipho Zwane four minutes later.
The hosts finally had the ball in the back of the net with five minutes of regulation time remaining in a sequence that resulted in Bafana Kali’s sending off, but JDR were able to hold on with 10-men to grab a full share of the spoils.
Cape Town Spurs: Vyver; Stander, Da Silva, Dortley, Fisher (Cupido 62′), Kassiano (Khumalo 78′), Mfecane (De Oliveira 78′), Losper (Velebayi 56′), Butsaka, Mosiatlhaga, Batista.
Goals: Abednigo Mosiatlhaga / Sello Letooane Sipho Zwane
Yellow cards: N/A
Match Report, 2020-21 GladAfrica Championship, Cape Town Spurs v JDR Stars
Share Post: