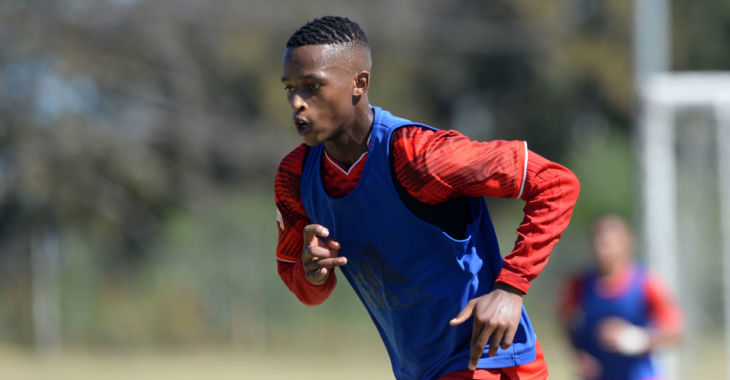 Khaya Mfecane is determined to get one over his older brother, Sonwabile, when Cape Town Spurs meet Sekhukhune United at Makhulong Stadium on Sunday. Kick-off is at 15h00 CAT.

Spurs travel up to Gauteng this weekend to take on the 2020-21 GladAfrica Championship leaders in Tembisa.

The Urban Warriors are unbeaten in three matches following a 1-1 draw at home to TS Sporting at Parow Park earlier this week.

Khaya Mfecane nodded home in the first-half of that match to earn 10-man Spurs a point. It was a maiden first team goal for the Spurs youth product that joined the club’s structures as a 13-year-old in 2014.

“I was very proud of myself because I’ve been putting in a lot of work,” said Mfecane on his first goal for the club.

“It feels good to give back to the club that has helped me and gave me my first contract, and that developed me as a player.”

The talented midfielder has played a more prominent role in the team over recent months and is excited by his progress.

Mfecane is happy with how the team performed against Sporting and believes the performance is a good marker for what will be a tough assignment in Tembisa.

“We played very well against Sporting considering we were down to 10-men for most of the match. Our fighting spirit was there to see and encouraging, definitely something to take into the next game.

“Simplicity would be the best way to deal with this Sunday’s game (versus Sekhukhune). In the last game against them we failed to take our chances and they punished us. It is possible to get all three points, it will be a challenge but we are up for it.

The 19-year-old has also sent out a clear warning to his brother, Sonwabile, who joined Sekhukhune in February.

“It is the second time this season that we will play each other, the first fixture we (Spurs) lost (4-1) so now I’m aiming to get one over him. I gave him one hell of a game in the first match so I think they’ll be planning for me this time around. It is payback time now,” Mfecane concluded.