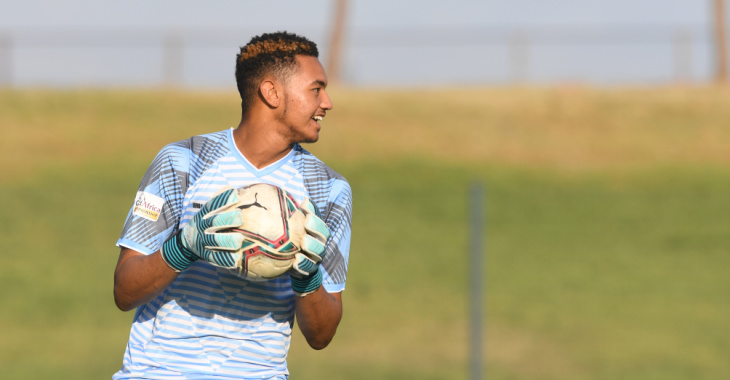 Cape Town Spurs endured another frustrating day out in the 2021/22 GladAfrica Championship season, at Tsakane Stadium on Sunday.
The Urban Warriors had the better of the chances, but failed to convert any and were ultimately made to settle for a 0-0 draw away to Jomo Cosmos.
Both teams were unable to keep hold of possession for more than a few passes and the early exchanges lacked any real fluidity as a result.
Cosmos conjured the first real chance at goal on the cusp of half-time when the ball broke on the edge of the area, but Lincoln Vyver made a top save to deny Ezenkozi the lead.
Spurs came out firing after the break and finally hit the target five minutes into the second half. Abednigo Mosiatlhaga beat his marker down the left flank before cutting in field and firing at goal but the Cosmos goalkeeper was up to the task.
The Urban Warriors kept knocking and should’ve hit the front in the 55th minute. Gregory Damons fired a low cross into a dangerous area which took the Cosmos shot-stopper out of the picture but somehow both Toriq Losper and Mosiatlhaga failed to make contact with the ball.
Spurs continued to look the more likely to find a winner, but Simphiwe Mambane also failed to convert a good chance in the 82nd minute and in the end the visitors were made to settle for a point.
Starting XI: Vyver; Da Silva (Dortley 64′), Damons (Mambane 71′), Mukumela (Mnchilizeli 46′), Sibane, Moroole, Butsaka, Mfecane, Ryan, Losper (Cupido 80′), Mosiatlhaga.
Share Post: