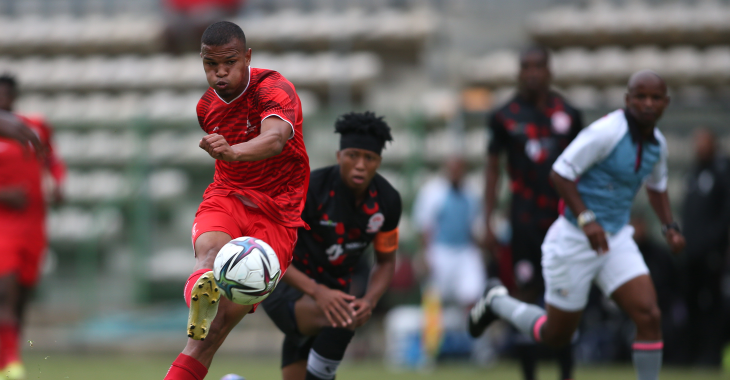 Cape Town Spurs hung on for a 2-1 win over TS Sporting at the Athlone Stadium on Sunday afternoon, with the result taking the Urban Warriors up to 12th place on the GladAfrica Championship standings.

Spurs got off to an absolute flyer and were two goals up within the opening five minutes of the match. The first arrived in just the third minute when Eyona Ndondo capitalised on space behind the Sporting defence and stabbed home from close range after good work from Panzo Bunga.

Two minutes later the Urban Warriors doubled their advantage, with Asanele Velebayi’s cross deflected into the net via a Sporting defender – with Bunga again heavily involved in the creation of the goal.

The visitors gradually recovered from the early blitz and began to find a rhythm in attack, though Spurs goalkeeper Zama Dlamini made a couple of commanding saves around the half hour mark to ensure his side retained full control of the match.

The host nearly added to their advantage late in the half, with Rushwin Dortley heading into the side netting after meeting Ndondo’s free kick, but ultimately the interval arrived with Spurs still 2-0 to the good.

The Urban Warriors opted for a double change at the start of the second half, with Khaya Mfecane and Toriq Losper replacing Ndondo and Moises Amor.

Sporting pulled a goal back through Humphrey Khoza on 56 minutes, taking full advantage of a set piece which was conceded by Jairo Da Silva – much to the anger of the hosts, who felt that the referee was being unjustly harsh on their players, while allowing the visiting team more room for aggression in the challenges.

Spurs almost restored their two-goal lead on 69 minutes, as Bunga forced a fine save from the Sporting gloves-man, before Dlamini was called upon at the other end to make two key saves with around a quarter hour of regulation time remaining.

The Cape hosts were able to resist the late pressure from TSS to claim all three points and leapfrog their opponents on the standings.

Spurs will return to GAC action on Saturday 11 December with a trip to face Hungry Lions at the GWK Park in Kimberley.