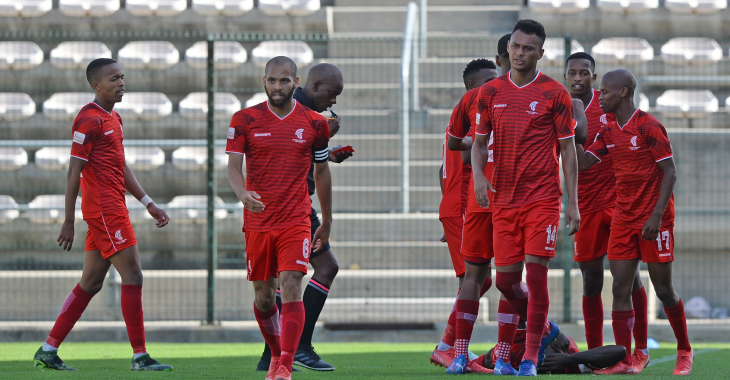 Cape Town Spurs brought to an end their work for the year 2021 with a hard-fought 1-0 win over Tshakhuma Tsha Madzivhandila in a GladAfrica Championship clash played at Athlone Stadium on Sunday afternoon.

The result means the Urban Warriors end the year in 11th place on the GAC log – 12 points off the pace of co-leaders Richards Bay and JDR Stars, as well as six points clear of the relegation zone.

After an early scare in which goalkeeper Zama Dlamini made a fine save to deny Rhulani Manzini, Spurs went on to create a couple of great chances inside the opening 10 minutes.

It was then the turn of Panzo Bunga to beat Kock with a shot, only to see his effort heroically cleared off the line by a TTM defender.

The Urban Warriors then suffered an injury blow on the quarter hour mark when Moises Pedro Amor was forced off with a knock and replaced by Colin Ryan.

Spurs were able to control the game and create a few half chances through the rest of the first half, though they would have been frustrated at heading into the break with the score still locked at 0-0.

However, the hosts did not have to wait for too long for a breakthrough in the second half, with a swift passing move ending with Bunga firing past Kock for 1-0 in the 49th minute.

TTM had the chance to level the game shortly thereafter when they were awarded a debatable penalty, but Dlamini came up trumps with a superb double save to keep the Urban Warriors a goal to the good.

Past the hour mark Spurs upped their push for a second goal and in quick succession both Ndondo and Rushwin Dortley were denied by fine saves from Kock.

The second goal did not arrive for the hosts despite their endeavours in attack, and Spurs had to weather late pressure from TTM to ensure that they claimed all three points on offer.

Spurs, and the rest of the GAC, will now enter a mid-season break encompassing the Africa Cup of Nations. The Urban Warriors are scheduled to be back in action on February 19, 2022 with a match away to TS Sporting.