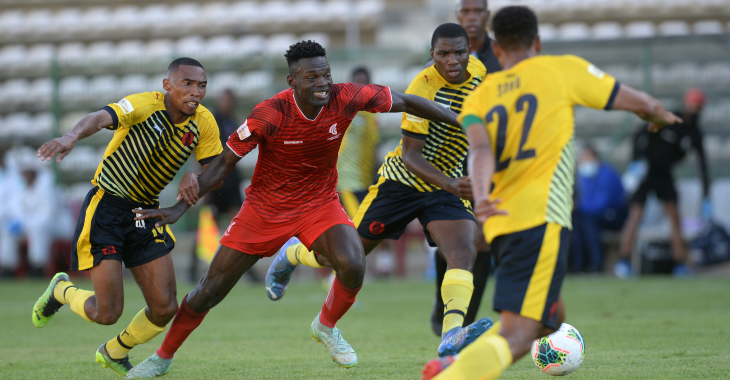 Cape Town Spurs were denied three precious points in the GladAfrica Championship on Sunday afternoon after being held to a 1-1 draw by Jomo Cosmos at Athlone Stadium.

Shaun Bartlett’s side went into the break a goal to the good after Asenele Velebayi broke the deadlock in first-half stoppage time, but Ezenkosi hit back in the 66th minute to take home a point.

The Urban Warriors came into the match winless in their last three league encounters, although Cosmos’ form was far worse as they hadn’t tasted victory in six outings.

Our boys applied early pressure on the visiting goal and Gregory Damons delivered a fine cross into the danger area on 10 minutes, which was just about dealt with by the opposition defence.

Damons looked to cause more problems on 18 minutes when he released Chumani Butsaka down the left flank with a fine threaded pass and the midfielder whipped an inviting ball into the box, but we couldn’t capitalise.

Spurs continued to push of the opener and their efforts were rewarded on the stroke of half-time as Velebayi produced a neat touch to get the ball onto his left foot before firing home into the bottom corner of the net.

Bartlett made a change at the interval, bringing on Junior Sibande for veteran Bevan Fransman to freshen up our defence.

Zama Dlamini was called into action on 65 minutes to turn a shot behind for a corner, but he was beaten just moments later as Jomo Sono’s men equalised.

However, Spurs were unable to breach Cosmos’ defence for a second time and had to settle for a share of the spoils.