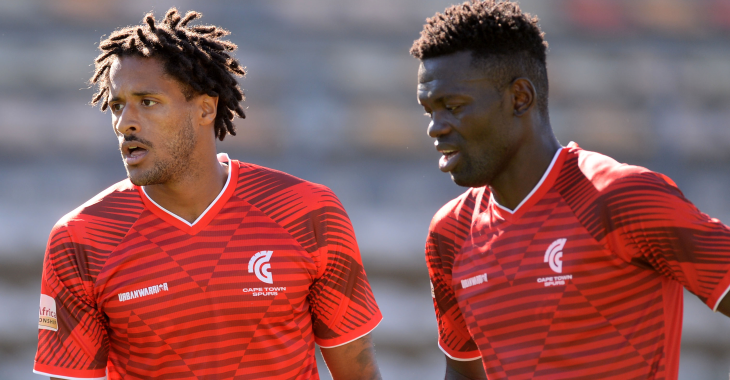 Shaun Bartlett’s side were denied two stonewall penalties as they looked to come back from an early goal down in Potchefstroom.

The Urban Warriors had produced heroics in midweek when they battled back from a two-goal deficit to beat JDR Stars 3-2 in Pretoria. However, there would be no repeat on this occasion, partly due to some questionable refereeing decisions.

The hosts got off to a flying start as they capitalised on a mistake in our defence to open the scoring after just three minutes.

Spurs wasted little time in searching for an equaliser and Tyrique Bartlett drew a fine save out of Thabiso Mabitsela on eight minutes after getting on the end of Chumani Butsaka’s cross from the right.

Chico Bunga was unfortunate not to restore parity two minutes later when his flicked effort was cleared off the line by the defender following another good cross from Butsaka.

The referee waved away appeals for a penalty on 18 minutes after Colin Ryan went down under a 50-50 challenge inside the area.

After Zama Dlamini pulled off a smart save to deny Rovers a second goal on 22 minutes, Butsaka flashed a shot inches past the upright in the 26th minute before Bartlett forced Mabitsela into a routine save on the hour-mark following good work from Butsaka and Bunga in the build-up.

Spurs continued to pile on the pressure and Butsaka threatened twice more before half-time, just missing the goal with a strike from range on 32 minutes, while he tested the home keeper from distance in the 43rd minute.

Ashley Cupido was unable to hit the target on the volley in the 57th minute after more fine play from Butsaka on the left before the match official denied us what looked to be a clear-cut penalty on 75 minutes when Liam Bern’s cross struck the defender’s hand inside the area.

Spurs had more appeals for a spot-kick turned down in the 81st minute after the ball hit the out-stretched arm of the defender before going out of play, with the ref only awarding us a corner.

Rushwin Dortley nearly equalised at the death after being played in by Eyona Ndondo, but Mabitsela pulled off a match-saving stop to keep out his blistering strike in stoppage time.