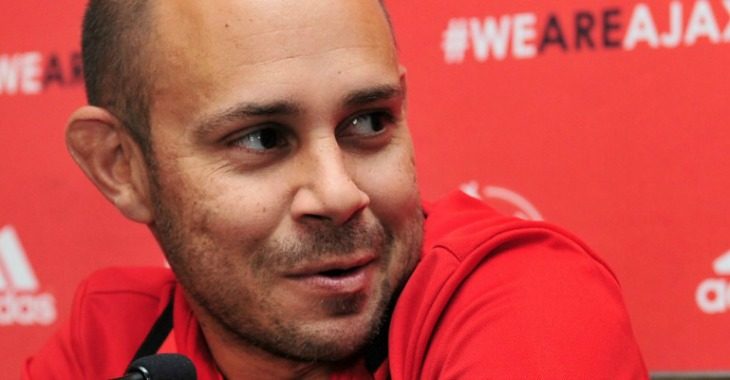 Community Scheme Coordinator Riyaad Khan plays an integral part in the workings of the club, and having brought up a decade at Ikamva he has now set his sights on reaching even greater heights.

Born in England, Riyaad’s father is a Capetonian and when the family decided to relocate to Cape Town on his retirement – Riyaad saw it as a great opportunity to broaden his horizon and kick-off a new chapter in the Mother City.

Leaving England was not easy as he enjoyed his time working at then Premier League club Charlton Athletic – for whom former Bafana Bafana forward Shaun Bartlett and defender Mark Fish used to play – but an opportunity to move to Cape Town was to great an opportunity to pass up on.

“I was doing community work for Charlton and I really loved working there, but after I found out about an opportunity to move down to Cape Town I just couldn’t say no,” said Khan.

“I kept in consultation with Chalrton who put me in touch with Ajax Cape Town, I still remember my first meeting with the club was with a certain Shooz Mekuto.

“We discussed the work that Charlton had been doing in London and obviously Charton were very much pro Riyaad so to speak, and wanting to break into the South African market, they said that I’d be a good fit if the club were aiming to do the same programme in South Africa.

“Which is of course the very same Community Scheme we talk about today.

“I duly met with the bosses at Ajax Cape Town and as they say the rest is history. I was employed, tasked to launch the same kind of community scheme initiative that Charlton run, here in South Africa.

Khan continued: “I officially joined in August 2006 during the first phase of the Community Scheme.

“Charlton Athletic had signed a task, backed by the British Commission, to try and launch something in South Africa – the 2010 FIFA World Cup had already been won by the country so South Africa was obviously a place where English club’s were trying to infiltrate.

“So as a result, Charlton turned their attention to South Africa and alongside the Metropolitan Police with the model of sharing their best practice over here: which was including police officers in soccer activation’s, which will evidently lead to crime reduction.

“That is why they were here so they were obviously looking for a football team in South Africa that were going to buy into the idea and see the importance of community work. Ajax Cape Town saw the benefit of and that is when we started.

“Look, the Community Scheme kicked off big time in 2007, we were very fortunate that when we started off the programme we had financial backing from Pick ‘n Pay,” Khan added. “It is obviously a lot easier when you have finances supporting you because in terms of buying equipment and paraphernalia that goes into such a programme it is a massive help.

“We were the first club in South Afirca that was doing an aggressive community programme, full-time, employing full time coaches. It was really beneficial and we got a lot of positve feedback from it.

“But the battle we have always had: Pick ‘n Pay gradually pulled away as they shifted focus, and as a result it fell pretty much on the club to support and sustain this programme. A programme of this magnitude is not cheap. We worked out that it costs in the region of R1.5 million to run this programme for a year.

“It was a battle then, because you want to get sponsors and you need money to sustain the programme. The biggest problem I found, I am actually one of the coach’s on the programme so it was difficult for me just to take a back seat and look for sponsors.

“The problem has also been that the Community Scheme has always been one of the club’s biggest kept secrets. It is great that we are doing it, but not enough people know what we are doing in these communities. That is a problem we have tried to overcome.

“Since last year Ajax Amsterdam have become aware of the great job we have been doing and very kindly the Ajax Foundation have contributed a large sum of money so we can take the programme to anohter level.

“There is a lot of community programmes being run in the country, a lot of NGO’s doing soccer. Soccer is the number one sport in South Africa so there will always be a passion and a love for it.

“The way we want to drive it…when you want to grow it is nice giving out all sorts of numbers, you work with X amount of kids and you touch this amount of schools. Numbers can also be misleading. If you tell people you work at 300 schools, but only see each school once every five years…

Riyaad hopes to overcome said challenges and has set himself and the club a few goals in attempt to not only better the Community Scheme, but also make the public more aware of the good work the Urban Warriors continue to do across the Western Cape region…

“My goal is to make this propgramme sustainable. Currently we have identified 140 primary schools across the Cape Town region that we go and visit for a six week programme: where we offer a soccer clinics and life skills . The goal is basically to sustain that relationship and making that school feel part of your family.

“Hopefully if the finances continue to grow you can then employ more coaches to work for the community scheme and your reach will consequently increase. Then you can start working with more numbers.

“The goal is always to try and take the Community Scheme to as many parts of Cape Town as possible, take it to as many kids with all kinds of backgrounds.

“We have been doing it for 10 years now and we are pretty much focused on the underprivileged communities – the biggest goal is to try and take it to as many communities as possible.

“But, yes, another challenge is to make people aware of it and for people to see the good work that the club is doing.

“An added bonus of course will also always be identifying a player that will go on to represent Ajax Cape Town’s First Team in the future. There is a lot of talent out there, it is just about presenting children with opportunities.”