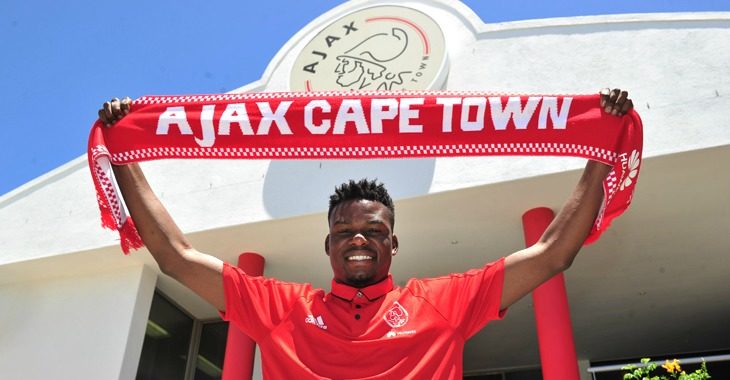 Ajax Cape Town are delighted to announce the signing of Muzi ‘Vava’ Thabotha. The 22-year-old joins the club one-and-a-half-year deal – with the option to extend his stay at Ikamva.

The towering forward scored 10 goals for the Lions of the North in the MultiChoice Diski Challenge last season, with his run of form not only guiding the club to a third place finish in South Africa’s reserve league but also earning him a place in the club’s Absa Premiership starting eleven towards the end of last season.

“I am honoured to be part of a great club like Ajax Cape Town; I thank the club for giving me this opportunity. I am confident that I will add value to the team and I am excited to start working with the squad as soon as possible,” said Thabotha on his arrival at Ikamva.

Head of Football at Ajax Cape Town, Mich D’Avray, revealed that they have been monitoring Thabotha’s progress over the past couple of months, with every confidence that he will make the step up into the Urban Warriors First Team.

“We first watched him when he played for Highlands Park in the Diski Challenge in February this year and he caught our eye immediately,” said D’Avray.

“The club have monitored his progress closely ever since and we are happy to welcome him to the club. He is a raw talent, not the finish product just yet, but we will groom him for next season.

“He is big, very strong, can hold the ball up and makes good runs. He has already played a couple of games for Highlands Park in the Absa Premiership towards the end of last season so he has some experience in the top-flight.

“Hopefully we can fast track his development, and through hard work in determination he can fight for a place in the First Team,” he concluded.