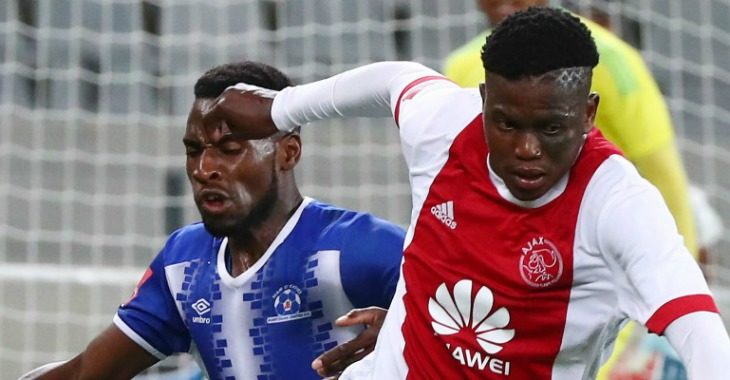 Ajax Cape Town showed early signs of promise only to be outdone by a determined Maritzburg United outfit in an Absa Premiership clash at Cape Town Stadium on Friday evening.

The Team of Choice coming from behind to secure a 2-1 win in the Mother City – a fifth consecutive win over the Urban Warriors moving the KZN club up to sixth place on the log standings. The Urban Warriors remain in 15th spot.

Muhsin Ertugral’s men were quick out of the blocks in a rapid start to the encounter. Fagrie Lakay and Tercious Malepe with the creative to tee up Tashreeq Morris who powered home with his head six minutes into the clash.

The visitors, though, would soon gain the upper-hand and went close to finding the back of the net in the 20th minute. Brandon Petersen with a top-class save to keep out Deolin Mekoa.

Malepe was then on hand to clear off the line before Mario Booysen watched his towering attempt well saved by Richard Ofori at the other end of the pitch.

Ajax Cape Town with a narrow 1-0 lead at the interval.

Mekoa came back to haunt the hosts once more as he hit the back of the net at Cape Town Stadium for the second season running. The winger driving home 30 seconds into the second stanza following a defensive blunder.

Maritzburg United would wrap up all three points as former Kaizer Chiefs man Siyanda Xulu rose highest before nodding home from a corner-kick, with 69 minutes on the clock.

Ajax Cape Town threw everything but the kitchen sink in attack in the closing stages, but the Team of Choice held firm as they spoiled the Urban Warriors party once more.