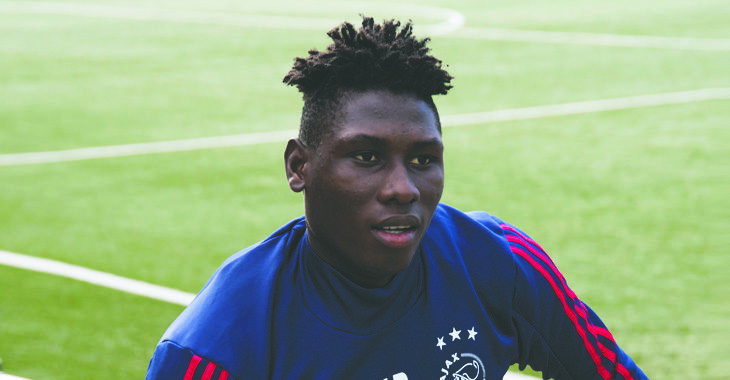 Ajax Cape Town forward Lassina Traore is basking in the Cape Town sunshine following his trip to a cold Amsterdam this month, but despite the freezing conditions, the teenage forward can’t wait to make a swift return to the Netherlands.

Traore trained with the Ajax Amsterdam First Team at De Toekomst where the Burkina Faso national was offered the opportunity to rub shoulders with the likes of Amin Younes, Matthijs de Ligt, Justin Kluivert and Klaas-Jan Huntelaar.

“It was a really good experience, I trained with the First Team there,” Traore said on his return to Ikamva. “The weather was awful and it was really cold, but I really enjoyed my time there.”

“I adapted quickly to the tempo of the training and I can’t wait to go back.”

“I also got to see my mother for three days, it was really nice. It was hard to say goodbye, but I have to keep working hard.”

Traore continued: “Everyone there is very good, Justin – I am so impressed by him, he is so young and he is constantly in the starting 11, he is also in the National Team. Younis is also a very good player.”

“The same for De Ligt, he is a big guy, a good player and he has already captained the First Team.”

Traore arrived in the Mother City last year after teaming up with the Urban Warriors U19 team on our European Tour. He settled quickly into life in South Africa despite not being able to speak a word of English at the time.

He swiftly found his scoring form and notably netted a hat-trick in a 5-4 win over Kaizer Chiefs in the MultiChoice Diski Challenge back in January.

Traore also got to spend time with Leo Thethani and Dean Solomons in Amsterdam, with the duo having joined the Dutch giants from Ajax Cape Town in August last year.

“Leo and Dean are doing well, I saw them a lot – we played Play Station and walked around Amsterdam. It was nice seeing them again and spending some time with them,” Traore concluded.