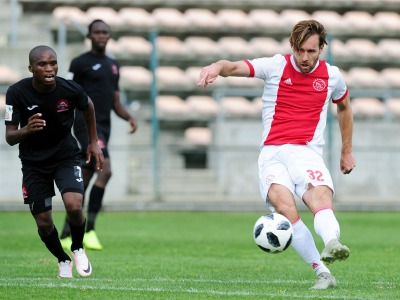 The urban warriors have now moved to second place on the log, five-points behind log leaders, Stellenbosch FC with seven games to go.

Verhaar opened the scoring in the 27th minute with a strike directly from a corner. His inswinging corner kick found the back of the net through a combination of deflections of TS Sporting defender and goalkeeper. The match official credited the goal to Verhaar.

On the 57th minute, Verhaar, who was celebrating his birthday on the day, scored his second goal with a trademark left foot strike from just outside the box to make it 2-0.

TS Sporting created couple of chances late in the game but captain Brandon Petersen was determined to keep a clean sheet, our first in the last four games.

Coach Andries Ulderink felt it was a well-deserved win even though it was not one of our best games.

“We had a very difficult first half; the opponents had a kind of tactics that we struggled with as they were well organized. We were lucky that we scored and led 1-0 at halftime. Ulderink said after the game.

“Second half, we dominated the game more, we were better on the ball. I think, after 25-30 minutes when we had the second goal, our level dropped again and I do not know why we stopped playing at 2-0. We have had this in several games were we stop playing after leading 2-0. We were lucky that they did not score to make it 2-1; it could have been nasty at the end.”

“Overall it was a deserved win but not our best game.”

Our next game is against Richards Bay on Friday, 15 March at Athlone stadium. Kick-off is at 15:30