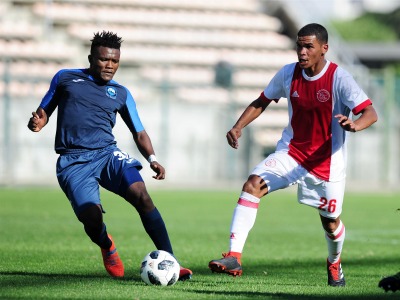 The Urban Warriors have now moved to third place on the log, as Royal Eagles victory on the weekend has moved them I point ahead of Ajax, with Stellenbosch FC Four points clear of Ajax with a game in hand.

A well organised Richards Bay side coached by Brandon Truter came to Cape Town fully aware of what they needed to do, which was to frustrate Ajax Cape Town FC and leave them no space in the attacking third of the field. Ajax were just forced to keep possession in their own half, a trend that was still visible in the second half with very few scoring chances created by the home team.

Second half was the same as the first half even with the attacking changes made by the home team still there was no way past the organised Richards Bay defence.

The highlight of the second half was the introduction of Tashreeq Morris, who came on very late in the game after missing more than 6 games through injury. Even he didn’t have enough time to influence the game. But I am sure the Coach and the fans are happy to see him back and available for the games to come.

Richards Bay created little chances in the game, and it was clear with their team set up that they came for a point. They were happy to absorb pressure and wait for a quick counter every time they had a chance.

Coach Andries Ulderink felt disappointed with the results as he thought his team had the better chances to win the game but none was taken.

“We had a very difficult first half; the opponents implemented tactics that we struggled with as they were well organized. We were unlucky that we couldn’t score with Prince on a few occasions in the first half, second half as well we had good scoring chances but it wasn’t to be. Ulderink said after the game.

“Overall it was a disappointing draw for the home team.”

Our next game is against Real Kings on Saturday, 30 March at Sugar Ray Xulu stadium. Kick-off is at 15:30.