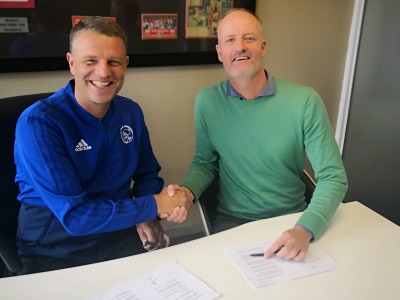 Ajax Cape Town are looking to strengthen their squad for the upcoming NFD season with the goal of gaining automatic promotion to the PSL and becoming the third team from the Western Cape to compete in the country’s top league.

The club’s board have considered all possible options, including purchasing a franchise, but have decided that at this point in time, for a variety of reasons, to continue in the NFD and focus all efforts on gaining promotion.

Having experienced football in the lower division last season, the club’s board has decided to maintain their technical team, headed by Andries Ulderink and to continue where the team left off the previous season.

Ari Efstathiou is confident that the team that will be assembled this season will be of better quality to that of last season.

“We are happy that coach Andries extended his contract with the club and in doing so confirmed his commitment to the project he started last year. The experience he gained in the season past will no doubt add to his ability to get the best out of our team this coming season. We are looking to have a better start than we did last season and hopefully hit the ground running when the season gets underway in August.”

Ulderink, after his return from Holland yesterday, seemed equally upbeat about the club’s prospects this coming season.

“I’m happy that we have managed to maintain the core of our players from last season and that I will have the management of the team from pre-season, unlike last season where I joined midway through. We have identified the areas we need to strengthen to have a squad that can challenge for the top spot this season. Our recruitment department has been working tirelessly over the off season and has managed to identify some exciting talent for the upcoming season.”

The squad returned on Monday, 24th June for their first training session. The current squad consists of at least 13 players from last season.