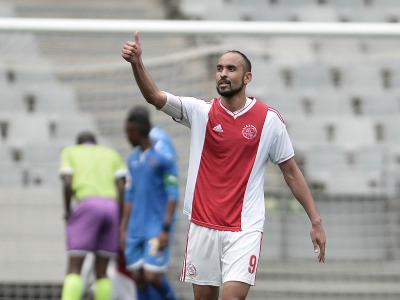 Khanyisa Mayo put the visitors ahead against the run of play before Thabo Mosadi levelled inside the opening half-hour but the early goals failed to spark the game to life.

It was a poor game overall with both sides neither taking control nor creating goal scoring chances until Rodgers’ scrappy header in the last minute of referee’s additional time handed the home side the much needed three points.

Mayo opened the scoring in the 10th minute with a free-kick that goalkeeper Nick Hengelman should have done better to save but failed to hold on to what should have been a routine catch.

Ajax went searching for an equaliser straight away and nearly got it in the 12th minute but Abednigo Mosiatlhanga failed to finish off a half chance from the right after being put through by Grant Margeman.

Thabo Mosadi poked in an equaliser in the 26th minute after going one on one with the Eagles keeper, Zama Dlamini.

With no clear chances being created, Margeman tried his luck from outside the box in the 37th minute but his effort was saved by Dlamini for a corner.

Istvan Bakx had a free-kick well saved by Dlamini with just over 10 minutes left.

The visitors thought they had done enough to earn a point when the 4th official indicated three minutes of added time but it was not to be.

Coach Andries Ulderink was evidently disappointed with how the team played but happy with the three points.

“Today was very bad, very bad from my team in every aspect, on the ball, in tactical discipline, choices on the ball and technical skills not good enough, one of our poorest games so far.

“I am happy with the fighting spirit that we did not give up until the end, we kept on going trying to score the goal against an opponent that was well organised with five players at the back. I am very happy with the results but not with the performance.” Ulderink said after the game.