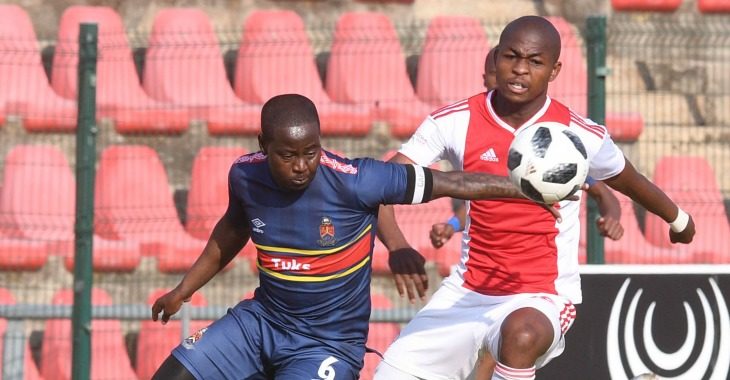 Ajax Cape Town took a huge step towards Absa Premiership promotion with a 1-0 win over University of Pretoria at Rand Stadium on Saturday afternoon.

Victory moves the Urban Warriors six points clear atop the GladAfrica Championship standings. Swallows FC will be aiming to narrow that gap back down to three when they face Steenberg United on Sunday.

Following a nervy start to the game in which Collins Mbesuma posed an obvious threat for AmaTuks, the Urban Warriors started to play with real confidence.

Thabo Mosadi, Chumani Butsaka, Kegan Johannes and Grant Margeman all tested the goalkeeper with the latter going closest in the first-half. Standing in as skipper for the injured Isaac Nhlapo, Margeman’s return made a huge impact and he was unlucky to see his rasping effort fly inches wide of goal.

Ajax Cape Town pulled ahead four minutes after the break. Siphesihle Mkhize made no mistake from the spot after Sonwabile Mfecane was brought down inside the area.

Istvan Bakx came close to doubling the hosts lead with a powerful effort from range in the 80th minute, but Dumisani Msibi was up to the task.

In the end, the Urban Warriors were deserved winners on the day as the club snapped a two-game losing streak to take a huge step towards league glory. We take on JDR Stars and Mbombela United in our final two games of the season.