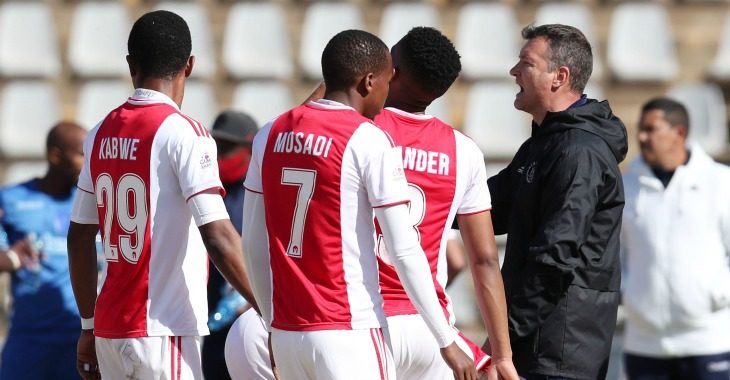 Ajax Cape Town have shifted their focus back to Tshakhuma Tsha Madzivhandila for the fourth game of the 2019/20 Premier Soccer League (PSL) promotion/ relegation play-offs at Bidvest Stadium on Tuesday. Kick-off is at 15h00 CAT.

The Urban Warriors slumped to a 1-0 loss away to Black Leopards at FNB Stadium last week and following Lidoda Duvha’s 3-1 triumph over TTM this past weekend, the Cape club now trail Leopards by three points at the halfway point.

“Disappointed with the result at the end of the day against Leopards. I think we deserved at least one goal in that game. A draw would’ve changed everything in the mini-league,” said head coach Calvin Marlin about last week’s loss.

“With them beating TTM on the weekend it has firmly put them [Leopards] in the driving seat and it is all up to us to get two positive results in the two games. Hopefully we can score a few goals, take a few of our chances and if we do well against TTM hopefully we can then shift focus to getting a comfortable win over Leopards to put the pressure back on them for the last game.

“For the final game, I don’t know where TTM will be by then. I am sure they are fighting more against us than they will against Leopards , especially after what they posted on Twitter: already congratulating Leopards on retaining their place in the Premiership. Hopefully the boys will be fired up and get a positive result in the next two games,” he concluded.