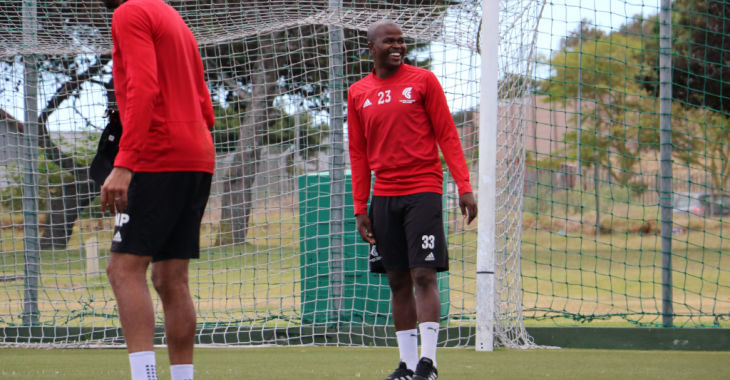 We caught up with Cape Town Spurs defender Junior Sibande ahead of Saturday’s 2020-21 GladAfrica Championship match away to Pretoria University.
Kick-off at Tuks Stadium is set for 15h30 CAT.
The Urban Warriors return to South Africa’s capital for the second time this week following a 1-0 win over Pretoria Callies on Tuesday. Ashley Cupido continued his scoring streak, finding the back of the net for the third game in succession to lead Spurs to all three points.
AmaTuks have struggled since winning their opening three games of the campaign and are winless in 11 matches following a 1-1 draw at Steenberg United in midweek.
Sibande, who captained Spurs in Atteridgeville this week, is no stranger to AmaTuks having spent the first five years of his professional career at the club.
How important was the win over Callies?

Yes, obviously it was an important win for us. We are battling at the bottom of the league standings so we desperately needed those three points to boost our confidence for the next game against AmaTuks.

AmaTuks haven’t won in 11 matches. How difficult of an opponent does that make them?

Collins Mbesuma is still scoring goals, how big of a threat is he? They also have good players like Samuel Julies and Harold Majadibodu who are well known by everyone at Ikamva…

I think especially Mbesuma, he’s a good player but I think if we believe in ourselves and keep our structure we’ll get something out of the match.

Spurs head coach Ian Taylor had the following to say after the club’s win over Callies:

“We had to show a lot of character, it wasn’t pretty but we are obviously happy with the win and happy with the way we played because we tried a new formation with three central defenders,” said Taylor.

“It is three points, much needed. We need to find some momentum and some consistency going forward now.”