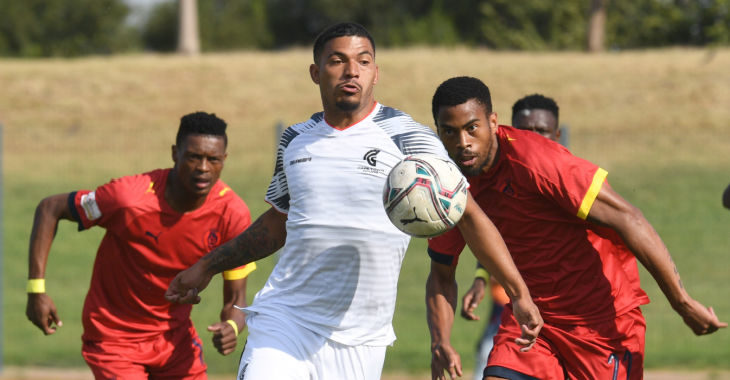 Cape Town Spurs stretched their unbeaten run in the 2020-21 GladAfrica Championship to five matches with a 0-0 draw away to Jomo Cosmos at Tsakane Stadium on Wednesday.
The Urban Warriors have now accumulated nine points from their last five matches with crucial games against Bizana Pondo Chiefs, Cape Town All Stars and Cape United to come before the turn of the month.
Spurs started the match on the front foot and went close through Abednigo Mosiatlhaga in the eighth minute.
Ian Taylor’s men dominated the first 45 minutes but were unable to convert a catalogue of chances in what was a thrilling half of football.
The second half was a complete opposite of the first, with little chances to write home about, but Mpho Kgaswane did come close to breaking the deadlock in the 55th minute when his free-kick cannoned off the woodwork and away from danger.
In the end, the two teams had to settle for a point apiece.
Cape Town Spurs: Vyver; Stander, Da Silva (August 46′), Sibande, Fisher, Mendonca, Mfecane (Koopstadt 68′), Losper (Kgaswane 46′) [Mukumela 79′], Butsaka (Akosah-Bempah 68′), Mosiatlhaga, Cupido.
Yellow cards: Sibande
Match Report, Jomo Cosmos v Cape Town Spurs
Share Post: