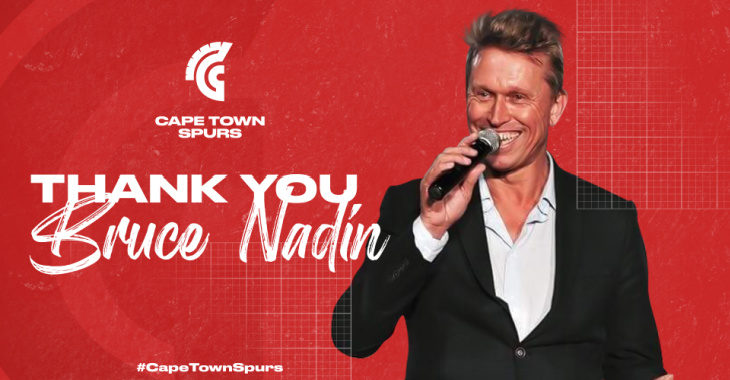 After seven years serving as Club Chaplain at Ikamva, Bruce Nadin has left the club.
Nadin formed an integral part of Cape Town Spurs’ inner-workings and his presence in and around Ikamva will be missed by staff and players alike.
We caught up with Nadin, to reflect on his time as an Urban Warrior:

Could you give us a brief outline of the experiences you had at the club?

Obviously there’s been lots of ups and downs. One of the high points would have been the two cup finals and especially the MTN8 cup win in 2015.

Of course there’ve been some difficult moments for the club as well, and whilst that’s not been easy, it’s been a privilege to be with everyone at the club in the good times and the bad. It’s important to remember that those highs and lows essentially mirror what life can be like for all of us.
As my role as sports Chaplain, I’ve been able to come alongside individuals as well – whether that’s players, staff or coaches – through those many highs and lows whether that’s career related or off the field. At the end of the day, over these last seven years, it’s been a real privilege to serve the club and I obviously hope that in the next few years the club will rise again to where it once was, because that’s its rightful place (in the DStv Premiership).

Was Cape Town Spurs the first professional club to use a Chaplain?

That’s a very good question. Ajax Cape Town was the first club, as far as we’re aware, to have a sports Chaplain. In many ways that was a bold decision by the club at the time because I think when you pioneer something and you do something for the first time there’s a degree of risk involved.

As a consequence of this, we’ve been able to start an organisation called Sports Chaplaincy South Africa. Our hope is to multiply sports chaplaincy not only in the world of football but in other sports as well and we’ve got about 30 Chaplains across the country serving in different contexts, but obviously in the future, we’d like to see that multiply many times over.
Cape Town Spurs will play a big part in telling that story because they were the first to dip their toes in the water. So, we’re really thankful for that. I’m very, very grateful for Ari, Alexi, the board, the coaches at the time (Roger de Sa) for giving me the opportunity to serve at the club and I always felt incredibly welcomed. I was always made to feel part of the family and these seven years will live long in my memory and the club will always have a very special place in my heart.

Is there anything you’d like to say to the players/ staff you’ve worked with over the years?

Yeah, it will be simply this: don’t forget your talent is a gift, a gift from God, and what you do with that talent is your gift back. So, you have a responsibility to steward it and to look after it and to never take it for granted.

Everyone at the club would like to thank Bruce for his contribution over the last seven years and we wish him the very best with his future endeavours.
“Bruce, we’d like to thank you for all that you’ve done for the past seven years. Although you weren’t always physically here you were always present and took care of a lot of issues. The value that you added was immense. Appointing you seven years ago was probably one of the best decisions the club has ever made.
“We wish you lots of luck going forward and it is our hope that Sports Chaplaincy will grow from strength to strength and club to club and sport to sport. We wish you all the very best, thank you,” said Spurs CEO Alexi Efstathiou.
Kuils River resident Denzel Smit will succeed Nadin at Ikamva. A leadership and personal development coach, Smit is an accredited sports Chaplain with Sports Chaplaincy South Africa.
He spent three seasons with Ubuntu Football who have graciously released Denzel to take on the role at Spurs.
Share Post: