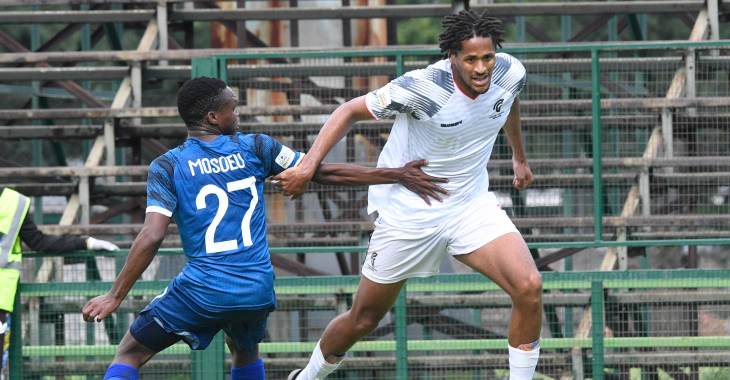 Tyrique Bartlett is a striker with bags of potential who is hoping to get his professional career up and running at Cape Town Spurs.

The 22-year-old joined the Urban Warriors in December 2021 and it was an opportunity to work with his father – the Spurs head coach Shaun Bartlett – as a first-team player for the first time in his young career.

Prior to his move to the Ikamva-based side, Bartlett got his first real taste of first-team action at Spurs’ former GladAfrica Championship rivals, Cape Umoya United in the 2019-20 campaign.

This shows that with more starts for Umoya in the second tier of South African football, Bartlett could have potentially scored more goals having netted his first and only goal as a first-team player thus far against JDR Stars in August 2020.

Umoya were Bartlett’s next destination after leaving Newcastle United in 2019 as he began life as a professional footballer following a two-year stint with the Premier League club’s youth teams having joined the Magpies from the University of Pretoria in 2017.

The Switzerland-born player was part of the Newcastle reserve team which campaigns in the English Premier League Two – a competition designed to boost the number of homegrown players progressing into the first-team squad of the clubs involved.

Bartlett’s final season (2018-19) with Newcastle reserves saw him score twice from six appearances in the league – including two starts for the Magpies as he was used mainly as an impact player coming from the bench.

Overall, the tall centre forward has found the back of the net three times from six league starts since he made his debut for Newcastle reserves in the 2017-18 campaign which was against Stoke City reserves in March 2018.

This includes the Spurs’ GladAfrica Championship clash against Tshakhuma Tsha Madzivhandila on December 19 as the Urban Warriors ended 2021 on a winning note and it was also Bartlett’s league debut appearance for the Urban Warriors.

With Spurs are set to resume their 2021-22 campaign against TS Sporting on February 19 following a mid-season break with the team currently placed 11th on the GladAfrica Championship standings.

Bartlett will be hoping that 2022 turns out to be the year he finally gets his career up and running by scoring goals that help propel Spurs secure to a top-half finish in the league.