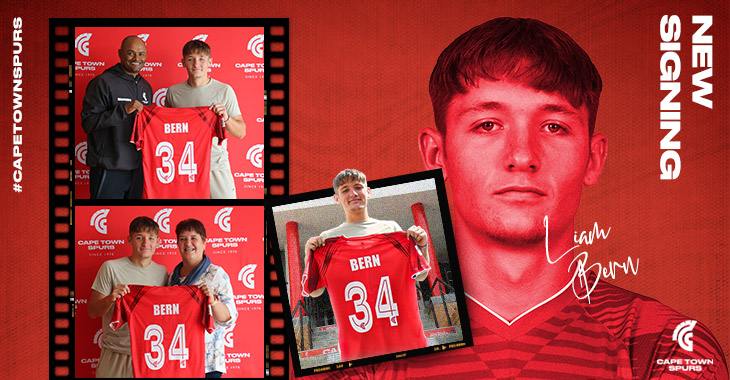 Cape Town Spurs are delighted to announce that academy graduate Liam Bern has signed his first professional contract with the club.

The 19-year-old defender has already made six appearances for Shaun Bartlett’s side in the GladAfrica Championship, the latest of which came in the 1-0 win over Pretoria Callies on Friday.

Bern was handed his first-team debut against Cape Town All Stars on 31 October 2021 and went on to be named the Urban Warrior of The Year at the club’s youth awards ceremony in November.

The teenager has been with Spurs since the age of 9 and is hoping to follow in the footsteps of former Urban Warrior Keagan Dolly by plying his trade overseas one day.

Bern also harbours ambitions of turning out for South Africa in the future, a dream that cannot be ruled out given what he has achieved thus far.

The Capetonian spoke about his journey towards becoming a professional footballer after penning the deal on Monday.

“I first started playing at Table View, I was around seven years old. From there I came to Ajax Cape Town when I was 9,” he told the club’s official website.

“It was a very big step. I was really happy because this was literally the best club in South Africa at the time and I’ve been here ever since. This club has really done a lot for me and I really do appreciate it.

“My main dream was also to get to the first team because there were a lot of players that I looked up to like Keagan Dolly.